CBD Benefits for You

CBD is often extracted from the cannabis sativa plant in oil form and mixed with an inert carrier oil like hemp seed oil for consumption. In fact, of the 60% of U.S. adults who report having used CBD before, 55% of them use CBD oils and tinctures specifically, according to a recent Forbes Health survey of 2,000 U.S. adults conducted by OnePoll. Â Cannabidiol (CBD) is an active compound in cannabis that has been shown to provide relief for many different medical conditions. Learn how CBD works and how it might benefit you. 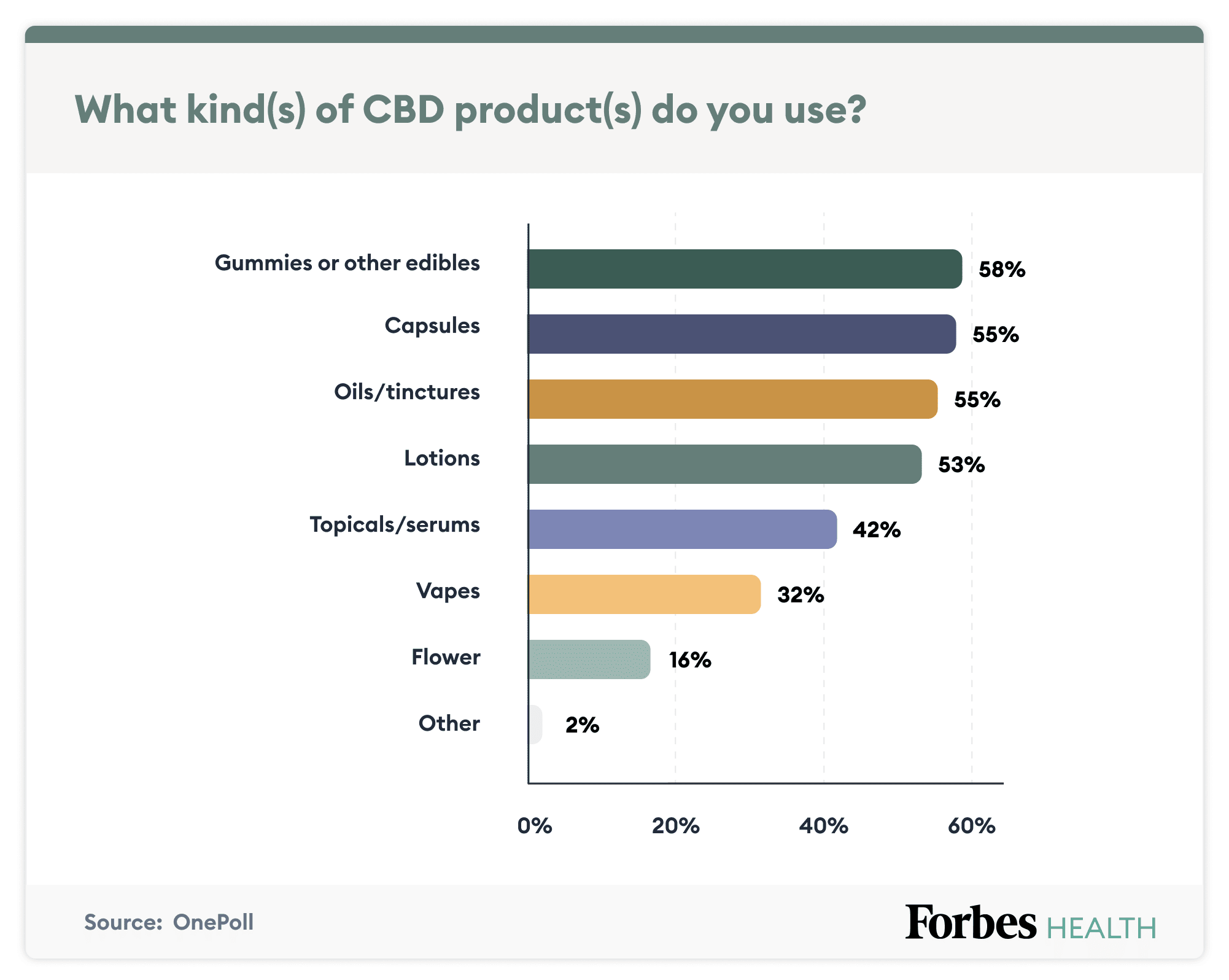 One of the most well-known effects of CBD is its sedative quality, which explains why its utilization has become so common. The anxiety levels of 57 males were measured in a research that was published in 2017 in the Brazilian Journal of Psychiatry. The test was a simulation of public speaking. Before making their presentations, some of the participants were given a placebo, while others were given either 150 milligrams, 300 milligrams, or 600 milligrams of CBD. During the test, those who took 300 milligrams of CBD had much less anxiety than those who got the placebo. This difference was statistically significant. It is interesting to note that individuals who received either 150 or 600 milligrams of CBD throughout the test reported higher levels of anxiety than those in the group that got 300 milligrams. What exactly is CBD stand for? Extracting CBD from hemp plants results in the production of CBD oil. It does not have any psychoactive properties and will not get you high. It has, however, been discovered to be useful in the management of pain, anxiety, and sleeplessness, amongst other difficulties. The consumption of CBD oil has not been linked to any adverse effects that have been discovered. In point of fact, due to the fact that it provides comparable advantages devoid of any of the accompanying adverse effects, some individuals turn to it as a substitute for prescription pharmaceuticals.

Meanwhile, at least one study in mice revealed CBD had effects similar to the antidepressant imipramine. Human trials are needed, though, to confirm whether CBD can induce this same antidepressant reaction in our bodies.

In some instances, CBD can be used to treat epileptic seizures.

In 2018, the Food and Drug Administration (FDA) approved the use of CBD under the brand name Epidiolex to treat seizures resulting from Lennox-Gastaut syndrome and Dravet syndrome—two rare forms of epilepsy—in patients at least 2 years old.

Three well-vetted studies provide the basis of support for the FDA’s decision. In these trials, 516 patients with Lennox-Gastaut syndrome or Dravet syndrome received either Epidiolex or a placebo. Epidiolex, when taken along with other prescribed medications, decreased the frequency of participants’ seizures compared to the placebo.

In a small 2018 study in the Journal of Alternative and Complementary Medicine, 11 people with post-traumatic stress disorder (PTSD) received CBD along with routine psychiatric care for eight weeks in an outpatient psychiatric clinic. Ten of the 11 experienced a decrease in their PTSD symptoms. CBD was generally well tolerated, the researchers write.

Margaret Rajnic, a doctor of nursing practice experienced in medical cannabis and CBD, emphasizes the importance of using therapy in tandem with any type of cannabis or CBD for PTSD. “There is an amount of therapy that is needed for PTSD,” she says. “But CBD will give you that little bit of decreased anxiety.”

Four other human trials from 2012 to 2016 suggest CBD reduces PTSD symptoms, although some include THC, or tetrahydrocannabinol, the main mind-altering element in cannabis. When THC and CBD work together, they create what’s called an “entourage effect,” complementing each other’s benefits and potency. For example, taking the same dose of THC and CBD together tempers the “high” from THC, while just a little THC paired with more CBD enhances the effects of the CBD.

Some studies—both preclinical animal and human clinical trials—suggest CBD could be used to help treat people who are dependent on opioids.

In one such study, researchers administered CBD to people with heroin use disorder. Over the course of a week, CBD significantly reduced heroin users’ cue-induced cravings, withdrawal anxiety, resting heart rate and salivary cortisol levels. No serious adverse effects were found.

Other studies find CBD helpful in reducing various psychiatric and medical symptoms like anxiety, insomnia and pain in patients with substance use disorders, indicating that CBD may be an effective treatment for opioid addiction. However, further studies are necessary.

Amyotrophic lateral sclerosis (ALS) is a disease that causes nerve cells in the brain and spinal cord to deteriorate, resulting in loss of muscle control that worsens over time. It’s not yet understood exactly why ALS occurs, although it can be hereditary in some cases. There’s no known cure, and there are only two FDA-approved medications to help treat ALS symptoms.

Research suggests people with ALS can benefit from the entourage effect created by the combination of THC and CBD, similar to people with PTSD. In a 2019 study, patients received a combination of THC and CBD in varying doses depending on their needs and preferences. Those with mild, moderate or severe spasticity (muscle tightness and stiffness) due to ALS reported high levels of satisfaction with the treatment, and those with moderate to severe spasticity reported higher satisfaction rates than those with mild spasticity.

In 2005, Canada approved the use of Sativex, an oromucosal (absorbed in the lining of the mouth) spray with equal proportions of THC and CBD, for the treatment of multiple sclerosis-related central neuropathic pain. In 2007, Canada approved the medicine’s use again for cancer pain that proved unresponsive to other medications.

Meanwhile, continued studies in the U.S. indicate CBD is effective in treating chronic, non-cancer pain. In one 2020 study, researchers administered CBD topically to a group of patients with symptomatic peripheral neuropathy (a result of brain nerve and spinal cord nerve damage) while another group with the same condition received a placebo. Results showed a significant reduction in intense, sharp pains and cold, itchy sensations in those who used the topical CBD compared to those who used the placebo. No participants reported adverse side effects.

When introduced topically, CBD oil doesn’t affect the systemic issue as it might if it were introduced directly into the bloodstream. Instead, topical CBD is more localized and treats pain in a certain area. Since it’s more direct, it may have a more pronounced effect.

For starters, tests on human cells found that CBD helps reduce the effects of high glucose levels on other cells in the body, which typically precedes the development of diabetes and various complications. Researchers concluded that with further studies, CBD could have significant benefits when used in patients with diabetes, diabetic complications and plaque buildup in artery walls.

In another small study, 13 patients with type 2 diabetes who weren’t on insulin treatment were given both CBD and a placebo (in lieu of insulin). Researchers found CBD decreased their levels of resistin (which causes resistance to insulin, the protein that regulates sugar levels) and increased their levels of glucose-dependent insulinotropic peptide (a hormone that ensures a sufficient release of insulin from digested food) compared to their baselines before they started the test. These results suggest CBD could be a natural treatment for diabetes by helping the body regulate insulin-related hormone levels.

Preclinical and clinical studies show that CBD has antioxidant and anti-inflammatory properties. Researchers deduce these characteristics can provide significant neuroprotection, or protection against numerous pathological disorders.

Several preclinical studies suggest CBD can produce beneficial effects against Parkinson’s disease, Alzheimer’s disease and multiple sclerosis. Huntington’s disease and cerebral ischemia were also tested, although significant positive results were not recorded. Further clinical studies are needed to confirm CBD’s benefits when used as a treatment for these disorders.

Deterioration of the tissues that are found in and around your joints is a hallmark symptom of arthritis. Pain, stiffness, and a loss of mobility are some of the symptoms that are associated with the many forms of arthritis. The goals of therapy for arthritis are often the alleviation of pain and the improvement of joint function.

When patients with rheumatoid arthritis were given a placebo or Sativex, the latter was found to promote statistically significant improvements in the patients’ quality of sleep, pain during movement, and pain while they were at rest. The study was conducted in 2006, and the results were published in 2006. Sativex is a botanical drug based on CBD, and it was approved for use in the United Kingdom in 2010. Sativex was tested as a therapy for rheumatoid arthritis for the very first time in this controlled trial, which included 58 patients. Researchers have discovered that cannabidiol, or CBD, can reduce inflammation and discomfort while also inhibiting the progression of illness.

Patients who had knee discomfort owing to osteoarthritis were given either a synthetic CBD gel in dosages of 250 milligrams or 500 milligrams daily, or a placebo, in a trial that was conducted in 2018. The purpose of the study was to investigate a more targeted therapy. Patients were instructed to discontinue the use of any additional anti-inflammatory drugs or painkillers, with the only exception of acetaminophen, both before to and during the course of the trial.

The findings were intriguing, but they did not provide a definitive answer to the question. The patients who were given CBD did not report a significant reduction in their levels of pain, in contrast to the individuals who were given a placebo. On the other hand, when measuring the average weekly improvement of their worst pain levels and their WOMAC (Western Ontario and McMaster Universities Arthritis Index) physical function rating, there were statistically significant differences between the group that received the 250-milligram dose and the placebo group. In this particular study, it appeared that males reaped the benefits of CBD to a substantially greater extent than women did.